Chances are you recall the Zika virus scare, right? Have you ever wondered why we all were so panicked and now are not for whatever reason?

Turns out all the attention the Zika virus was getting through the media in the past few years was simply to support the spraying of toxic larvicide chemicals on the areas that had been allegedly affected. In case you didn’t know the Zika virus is not a new virus it has been around for well over seventy years. It was harvested and researched by the Rockefeller Foundation.

You also might not know that this virus is HARMLESS to everyone because our bodies self-immunize against it without even needing a vaccine. If you take the time to look at the Zika overview on the CDC’s website you will find that it states the following.

“Many people infected with Zika virus won’t have symptoms or will only have mild symptoms.” (In other words, the symptoms are so mild, most people won’t even experience any ill effects at all.)

“Once a person has been infected with Zika, they are likely to be protected from future infections.”

“People usually don’t get sick enough to go to the hospital, and they very rarely die of Zika.” (There’s no hospitalization required because the infection is so mild.)

One of the more bullshit lies that was shoved down our throats was that the Zika virus was responsible for every case of microcephaly when it is not related AT ALL! Microcephaly for those who do not know is a medical condition in which the brain does not develop properly resulting in a smaller than normal head. There is no scientific proof to back up any claims of this, not even the ones being made by the CDC itself. The CDC used epidemiological statistics to reach their conclusion of this NOT scientific methods. 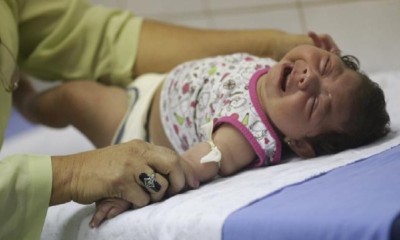 Yes, they were able to link women that were suffering from microcephaly in their newborn children to areas in which mosquitoes were carrying the zika virus BUT they failed to mention that these cases were also in the same areas in which our lovely government sprayed those highly toxic larvicide chemicals I mentioned earlier. These chemicals are able to interfere with the nervous systems of insects, who knows what kind of fucked up stuff they could do and most likely do, to us.

This chemical is brain damaging and is known as pyriproxyfen. It was actually dumped into the water supply in Brazil and brain deformities were recorded shortly after. Do not believe everything the government tells you, we are merely pawns in this game of shit they are playing.

When it comes to our health researching things ourselves is the best option. For more information on Zika, Brazil, and pyriproxyfen please take the time to watch the video below. The government loves to use the media to freak people out and get a response. Do not be controlled.