Medical science is rapidly expanding as new research takes place. A great example is a new study in which scientists turned a spinach leaf into live heart tissue.

The study was published in the Journal of Biomaterials earlier in August. In the study, researchers were able to successfully build a working human heart muscle from a spinach leaf. Researchers from Massachusetts Worcester Polytechnic Institute have been able to manipulate the physical properties of spinach to create a living human heart muscle. The tissue engineers stripped green spinach leaves of their cells, turning it translucent. They then seeded the gaps the cells left behind with human heart tissue!

The research study is absolutely revolutionary and gives new light to people who suffer from a weakened heart or heart defects. The heart tissue that filled the cell gaps in the spinach leaf was able to beat for up to three weeks in their usual environment, as 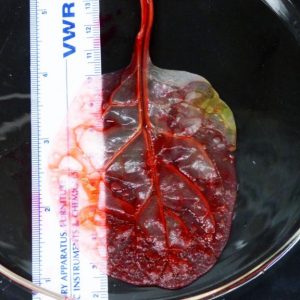 reported by the journal Biomaterials. WPI engineers Glenn Gaudette and Joshua Gershlak came up with the idea over lunch. They were brainstorming ideas of how to solve the lack of donor organs and the 100,000 people on a list waiting for one.

Scientists have already been trying to print a 3D heart, but not any of them were perfect. “One of the big problems in engineering heart muscle is getting blood flow to all of the cells,” Gaudette, a professor of biomedical engineering at WPI, told The Washington Post. “Heart muscle is pretty thick.”

Instead of creating, or printing, the perfect heart, the scientists decided to borrow from what nature already evolved – the spinach leaf. “We use detergent — soaps — which strips away the cellular material of tissues,” said Gershlak, a WPI graduate student in Gaudette’s lab. “This leaves behind the protein matrix and structure.”

Alongside the cells from the spinach leaf, they also removed cells from parsley, sweet wormwood, and peanuts. The researchers say that the spinach leaf is likely to work best for heart tissue. The template improved over time and developed so that damaged tissue can be replaced in patients who had a heart attack or were even likely to suffer from one.

They hope that one day this technology will be able to generate new heart matter. It truly is an amazingly groundbreaking study! “We have a lot more work to do, but so far this is very promising,” study co-author Glenn Gaudette said in a press statement. “Adapting abundant plants that farmers have been cultivating for thousands of years for use in tissue engineering could solve a host of problems limiting the field.”