Tyson Foods has quite the reputation for the animal abuse that transpires within its facilities that are used to provide chicken, eggs, and other products. However, the madness doesn’t stop there either, as they have now been deemed the worst corporate polluter on the planet.

For years, Tyson’s atrocious practices have been revealed in numerous investigations. In these investigations, they have been caught torturing hens for eggs, beating pigs while holding them inside of disgusting, tiny pens, and then forcing chickens and their babies to dwell in pens that are so covered in their own excrement that many of them die due to the ammonia fumes.

Now, new research has shown that not only is Tyson responsible for the hideous treatment of innocent creatures, but they are also responsible for contaminating America’s waterways too. Their contamination spreads throughout from the Chesapeake Bay to the Gulf of Mexico, and its reach has even found our drinking water.

It is the farm operations that contribute to the destruction of our water supply by the use of petroleum and chemical fertilizer, a fertilizer that is run-off from genetically modified grain used to feed their livestock.

When questioned about their use of genetically modified organisms (GMOs) they stated,

“We have systematically genetically modified all the foods, the vegetables and the animals that we have eaten ever since we cultivated them. 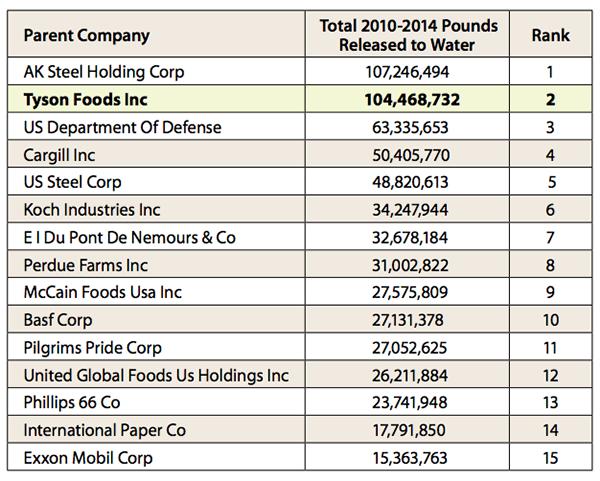 They have to report on its farm and fertilizer use to the U.S Environmental Protection Agency as well as other corporate entities, who then distribute a report.

According to the TRI (Toxic Release Inventory) report Tyson has already dumped 104 million pounds of toxins into our waterways between the years of 2010-2014.

Sadly, most petitions and protests against the company have focused almost entirely on just their treatment of animals. Due to the information found in the TRI report, it would appear that maybe we should add a second petition focus to the list, and request that they stop their contamination of our water supply. If they continue to pollute our water with no one stepping in and stopping them, it could set a new precedent for other companies, one which says it is okay to destroy the environment as long as you are a corporate giant.