Terrifying Warning For All Mothers Of Boys This Summer

Summer is here and that means lots of swimming and fun in the sun. It also means that you might want to pay more attention to your boys and possibly change the type of trunks that you buy them.

Most of the time when you buy swim shorts there is a white mesh synthetic mesh inside the outer fabric. To one mom an innocent purchase turned into a dangerous nightmare.

Laura Collins was on vacation in Spain with her five-year-old son Jack, after a day of swimming, she took him into the shower to remove his swim trunks. As she pulled them down she realized that his penis was caught in the netting, and as she wrote on her Facebook the netting was “literally strangling it.”

“He was screaming a scream I hadn’t heard before,” she wrote. As he wailed in pain, she raced him to the medical center at the hotel where she was staying, only to learn they were unable to help her. 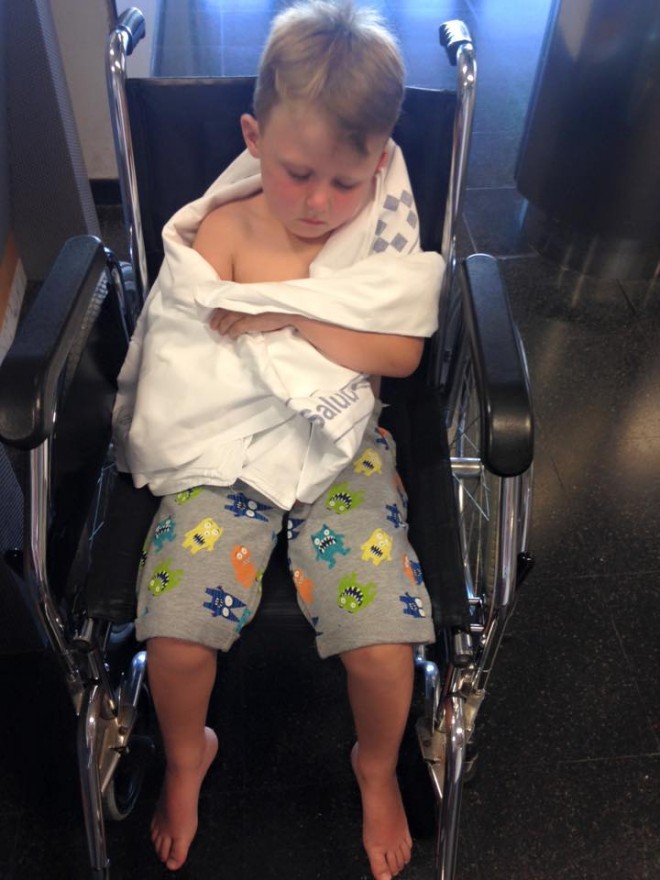 “I carried him to reception and asked for some scissors,” she told The Mirror. But neither she nor the staff were able to free the distressed child’s penis. “There were two little bubbles, like skin, on either side,” she said. “Like it was going to burst.”

In her panicked state, Laura raced to the nearest hospital where doctors gave him a local anesthetic and managed to cut his penis free. They were concerned at first that there would be permanent damage to the boy’s urinary tract, thankfully, soon after he was able to urinate properly. Doctors confirmed that there was no lasting damage.

The doctors also confirmed that they had seen this sort of thing before, and warned that it is more common than parents realize.

Laura says that Jack has recovered without issue, however, she is warning parents to be extra careful with the netting in boys swim ware.

“Jack was very upset about it afterwards but as five-year-olds do, he’s bounced back,” Laura told The Mirror. “He keeps talking about it now but he’s fine. He talks about how he nearly lost his willy on holiday and goes on about the naughty netting. He’s been warning all his friends as he doesn’t want the same thing to happen to them.”

“Please, those with young children,” Laura begged on Facebook, “remove the netting in swim shorts.”

I suggest cutting out the netting or purchasing some without it.

9 Signs That Your Body Is Crying for...

Turmeric Works Better for Knee Pain Than Any...

15 Ancient Beauty Secrets That Are Useful Even...

Cleanse Your Colon FAST With These 10 Remedies

How Your Finger Shape Determines Your Personality (And...

9 Foods Your Vagina Needs You To Eat

7 Simple Homemade Pregnancy Tests & When to...