Today it is extremely hard to eat healthily. Not only because processed food surrounds us, but because even the brands who claim to be healthy are lying to us.

There are tons of brands in our supermarkets that claim to be healthy for us, organic, natural, and nutritional but they are literally the opposite. They are everything unnatural and man made, and it’s just as bad for you as processed food. We know that sodas aren’t healthy for us, but soda business corporations refuse to let us get away from them. Our money is their money, and without it, they’re powerless.

Many people believe that making the switch to diet drinks is a healthy decision. Diet soda drinks are causing many more problems and complications than regular soda does. Many people believe that reduction in sugar, carbs, and extra calories makes it healthy, but this is horrifically wrong. It’s a loophole they use to sneak dangerous, cheap ingredients in place of the sugar, carbs, and calories. It makes it taste essentially the same, but it’s a scientific concoction of chemicals created in a laboratory.

Diet drinks are far from healthy for our bodies. They increase your risk of many different health complications, including an increased risk of stroke and dementia. Don’t believe me? Well, researchers studied diet consumption in about 3,000 different adults. In adults older than 45, the artificial sweeteners in soda 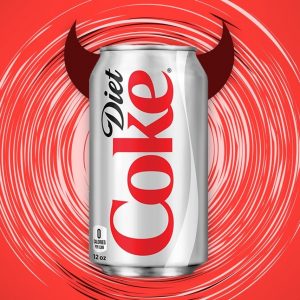 had increased their risk of stroke. Adults over the age of 60 had an increased risk of dementia. Aside from outside factors such as overeating, smoking, diet, or exercise levels, diet soda was found to cause an increased risk for both dementia and stroke.

Boston University studied how sugary sodas, soft drinks, and fruity drinks impact the brain. They used MRI imaging, cognitive tests, and existing data to conclude that drinking more than two sugary drinks a day, or more than three sodas a today, resulted in a smaller brain volume. You can’t deny how terrifying that is. According to their research, drinking more than two sugary drinks per day causes brain shrinkage. It also accelerates brain aging, resulting in memory loss and increasing the risk of early-stage Alzheimer’s.

You should refrain from all soda drinks in general but especially avoid diet drinks. They are not the solution to any health issue, and they even make you gain more weight. Try enjoying some tea instead!