When it comes to losing weight and obtaining the bodies we want we often forget the mental strength that is needed to accomplish our goal. If you want to work towards getting in shape you will need to strengthen your mind and get in the right place to do so.

Motivation is what drives us to do the things we want to do. This was proven once again by a man named Andy Albertson who lost over one hundred and fifty pounds in under a year. Albertson is from Texas and knew that if he changed his mindset he would be able to do the impossible. 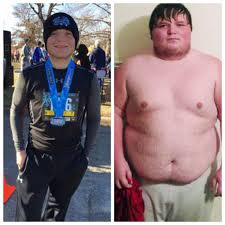 Albertson started his journey weighing three hundred and seventeen pounds, in junior high he was even nicknamed ‘andyopolis,’ as a joke regarding his weight. Albertson was bullied through high school as well and of course because of this found comfort in food. He finaly began his weight loss journey in January of 2015 when he joined a gym and began working out for one hour a day using the elliptical. In just his first month of going to the gym he lost twenty pounds.

Once Albertson reached a weight loss of sixty pounds he hit his first mental block. He knew without a doubt that he had to do something about this to keep the weight off. Albertson began working with a personal trainer and was given a strict workout regiment that required hard exercises three days in a row and then cardio every day as well.

After reaching a weight loss of about one hundred and forty pounds he hit another mental block this time it seemed he could not get over his issues but with encouragement from those who cared he was able to keep going. It is important to have people behind you who will keep you motivated and pushing forward.

We could all learn a thing or two from Albertson. He has done exactly what all the bullies thought he couldn’t. If you want to get started losing weight and working out try the four-minute fat burning exercise in the video below.

We could all learn a thing or two from Albertson. He has done exactly what all the bullies thought he couldn’t. If you want to get started losing weight and working out try the four minute fat burning exercise in the video below.