Home Health What Are The Symptoms of Polycystic Ovary Syndrome (PCOS) and How To Treat It Naturally!
Health

What Are The Symptoms of Polycystic Ovary Syndrome (PCOS) and How To Treat It Naturally!

Polycystic Ovary Syndrome (PCOS) affects 1 in 10 American women. This common health problem is caused by an imbalance of reproductive hormones in the body, causing problems in the ovaries. Symptoms may begin to develop shortly after puberty, however it may also develop during the later teen years and even as late as early adulthood. 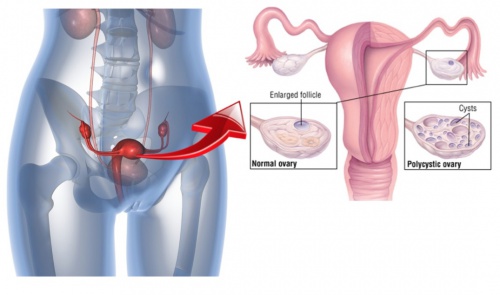 While doctors are aware that PCOS is caused by insulin resistance, there is still much unknown about the relationship between the two conditions. For those who are suffering, there are a variety of natural treatments available!

PCOS may good undiagnosed for an extended period simply because the symptoms are often attributed to other causes, or go unnoticed completely. The good news is that it can be managed once it has been diagnosed! Watch for these 12 symptoms.

If you are experiencing any number of these symptoms, contact your doctor. There is no single test to diagnose PCOS, however your doctor is able to run a number of different tests which combined may be able to lead to an answer.

What Can I Do?

If you have been diagnosed you are now probably curious as to what you can do to manage, and even end the symptoms that you are experiencing. There are a number of natural options that you can use!

One of the first changes that many sufferers make is to adjust their dietary choices. With PCOS being caused by insulin resistance, it is important to be aware of and maintain control over the glucose levels in your body. Eating the bulk of your day’s calories for breakfast, rather than later in the day, will hep to stabilize insulin levels. It has also been found that women can decrease the severity of their symptoms by losing weight in many cases. A PCOS-friendly diet consists of fruits, vegetables, whole grains and low-fat dairy products.

It is important that you discuss the option of herbal remedies with your doctor, and proceed with treatment under his/her care in order to ensure that you are able to see the best possible results. Herbal options are gentle on the body, with fewer side effect than the medical options. Some common herbal remedies for PCOS include chaste berry, dandelion root, milk thistle, licorice, saw palmetto, stinging nettle, spearmint, red clover, st john’s wort and more.

Home remedies allow women the opportunity to manage the symptoms of their PCOS at home. While there are many home remedies that have been found to be effective, the three most common treatments include:

Apple Cider Vinegar: A reasonable accepted dose of apple cider vinegar is 2 tablespoons in a glass of water, 3 times per day. If you are not found of the taste, it can also be mixed in with stronger-tasting beverages. Apple cider vinegar has been found both to control blood sugar and reduce the production of testosterone.

Cinnamon: Consuming approximately 2 teaspoons daily is all that is necessary to experience the benefits of cinnamon in the treatment of PCOS symptoms. It has also been found to decrease insulin resistance.

Flax Seed: Women should consume 1-2 tablespoons of flax seed daily. This will allow it to naturally balance the overproduction of male hormones within the body. It is also high in fiber, and has been found to reduce inflammation.