Transferring Fat From Your Stomach to Your Scalp Could Cure Baldness

Nobody wants to experience a receding hairline. It can seriously damage your self-confidence and change the way you look completely!

Fixing it can be difficult and dangerous, but these researchers might have found a safer and more effective fix for baldness. According to the study, doctors can remove fat via liposuction and injecting it into your scalp. Scientists claim that the fat cells stimulate your hair follicles and increase hair growth. This procedure offers a way to regrow your balding hair and shrink your waistline. Although, liposuction does have its downsides.

According to the Sun, the study results were very positive. They report that the researchers found a 93% increase in hair growth and 23% more hair count in just six months. The author of the study, Dr. Edward Ball says the results were very promising in finding an easier and more effective way to regrow their hair. According to Dr. Ball, “The most common form of male pattern hair loss is something called androgenic alopecia and it affects a substantial chunk of the population – 50 percent of men. And hair loss isn’t just a male affliction, with up to 45 per cent of women experiencing it too,” The Sun reports. 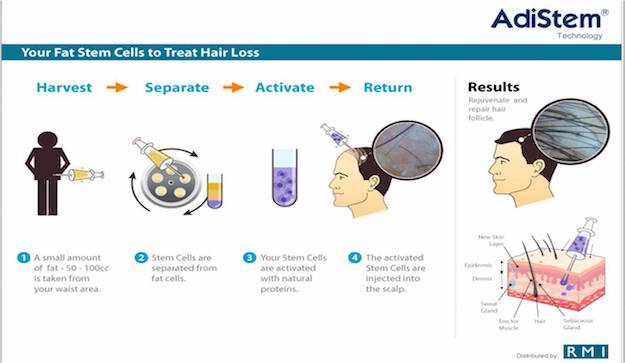 Modern day hair loss treatment include pharmaceutical drugs like Finasteride and Minoxidil. Some people have allergic reactions and their bodies can’t handle this medication though. You can also have hair transplantation. Which more of a permanent hair restoration method. “The problem arises, however, in the fact that a hair transplant sometimes isn’t an option, particularly where hair loss is in its infancy, patients have diffuse thinning, or where there’s poor donor availability,” Dr. Ball says.

Dr. Ball and his co-author, Craig Ziering of Ziering Medical in Beverly Hills, tested the fat transplant hair restoration method in six volunteers. the tissue to the scalp and around hair follicles, which are present but not growing, they could stimulate hair growth,” The Sun reports. They continue, “While they were sedated, Dr. Ball’s team injected around 1ml of enriched fat per square centimeter of the scalp, in a “fan-like” pattern. Their hair was then photographed and documented and monitored again at 12, 24 and 32 weeks.”

The research they found after six months of testing was that injecting were incredible. The results at the end of the six-month period were quite impressive. “The research showed that hair count in patients increased from 17.7 per square inch of the scalp to 31.2 – a jump of 23 percent. Meanwhile, the growth phase of the hair almost doubled, boosted by 93 per cent,”

“The other important thing to note is that autologous fat transplant has been shown to be well tolerated, as it’s been used for many years in other cosmetic surgery procedures to add volume to the face and breasts, in what’s called ‘lipomodelling’,” Dr. Ball says.

How Toxic Relationships Affect Your Health, According To...

Add These 6 Vitamins to Your Diet to...

6 Reasons Why Banana Peels Are Great For...

Get Rid of Varicose and Spider Veins From...