Home Health THIS May Save Your Life: The Difference Between A Heart Attack, Stroke And Cardiac Arrest
HealthNatural Cures

THIS May Save Your Life: The Difference Between A Heart Attack, Stroke And Cardiac Arrest

Cardiac arrest, heart attack, and stroke are one of the most deadly things that can occur in the human body. Knowing the difference in them might save your life – or someone else’s.

While cardiac arrest, heart attack, and stroke are all similar and typically involve the same body parts, they are also quite different. You additionally have to respond to each one differently in the event of an emergency. For example, cardiac arrest is typically caused by an electrical malfunction in the heart, while a heart attack occurs when the blood flow is blocked off from the heart. 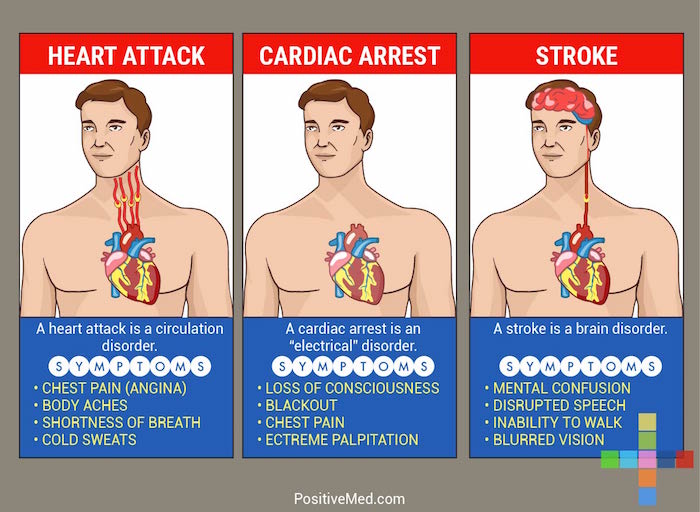 If you suspect someone is entering cardiac arrest you should first call 911 as fast as you possibly can. Time is absolutely the lifeline in all of these health issues. After you call 911 start CPR right away. If an AED is available, use it.

Heart Attack – heart attacks happen when the blood flow to the heart is blocked. A blocked artery will prevent oxygen-rich blood from reaching a section of the heart. The longer the artery is blocked the lower the chances of survival are. If a heart attack is extensively bad, but the patient still survives they will have a weak heart now. This is because when the artery was blocked the part of the heart it nourished began to die.

Stroke – A stroke is a “brain attack”. It can happen to anyone at any time. It occurs when blood flow to an area of the brain is cut off. When this happens, brain cells are deprived of oxygen and begin to die. When brain cells die during a stroke, abilities controlled by that area of the brain such as memory and muscle control are lost.

If you suspect someone is having a stroke get them to the hospital immediately. There really isn’t a whole lot you can do for a stroke victim other than keeping them conscious.