The Hallucinogenic Honey of The Giant Himalayan Bees [Video]

One of the most amazing bee species around makes its home in the Himalayan Mountains. They are known as Himalayan Honey Bees (Apis dorsata laboriosa) and are huge!

These bees can grow up to about three centimeters which is pretty insane compared to other bees. They are the largest honey bees in the world. These bees produce a honey that is red in color. It is highly sought after by the people of Nepal and China. This amazing honey is overflowing with health benefits as well.

The honey from these amazing bees can help with issues like hypertension, sexual performance issues, diabetes, and appears to have some psychoactive properties. While it can benefit us in many ways this honey is not easy to collect. The people of the Gurung ethnic group know just how hard it really is as this is how they make their living. They make a trip to extract this honey at least twice each year. 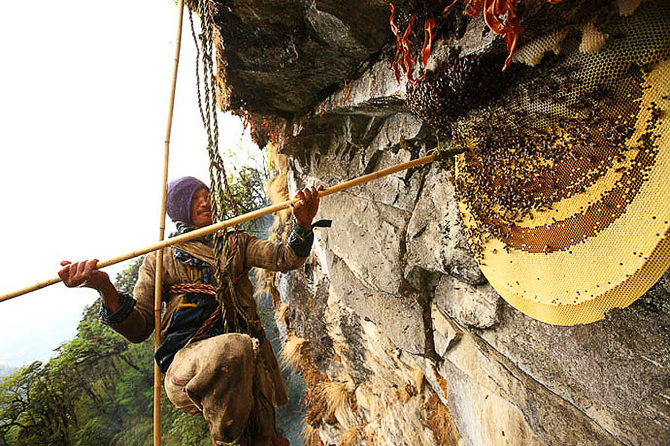 These brave people have to climb down the sides of cliffs all the while being swarmed with bees. They risk their lives for the sake of collecting this honey. The effects of this hallucinogenic honey have been documented as far back as 401 BC. Ingesting the right amount of this can produce mild highs and alleviate things like joint pain but if someone were to ingest too much they would likely be sent into a toxic, cold-sweat trip of hallucinations with added symptoms like vomiting and diarrhea that can last for over 24 hours!

What Makes This Honey Hallucinogenic?

That is something that comes from the bees and Nepal’s national flower. Nepal’s national flower is the rhododendron and these bees pick up its pollen. The pollen happens to contain a chemical known as grayanotoxin which becomes infused with their honey and gives it the hallucinogenic powers. There is no way to control the amount of pollen consumed bu the bees so the potency of this honey varies with each season.

For more information on these astonishing people retrieving this honey and the honey itself please take the time to watch the video below. Would you put your life at risk for honey like this? Do you think it is worth is?