One study has shown that vaccinated children are actually three times more likely to be diagnosed with autism as well as other serious neurological disorders. Yet, for some reason, this study has been ‘unpublished’ and is even being pulled off of the internet because of criticism coming from the vaccine industry.

Originally the study was published online in Frontiers in Public Health, but was ‘unpublished’ by the journal after the heavy pressure and criticism being thrown at them by mainstream media and vaccine lobbyists. This study is being silenced because it is extremely important and damning to the vaccine industry.

In the study children’s health is compared through surveys. The surveys of 412 mothers of children aged 6-12, almost 40 percent of the 666 children had not been vaccinated. The control group was adequate, to say the least. This study found that children who were vaccinated were significantly more likely to be diagnosed with pneumonia, allergies, autism, and ADHD.

This study was peer-reviewed by Linda Mullin Elkins, a chiropractor at Life University and Kelly Hsieh from the University of Illinois at Chicago. Public comments about this study were, to say the least brutal. While this study is no longer available on the website for Frontiers in Public Health it is also not available on the internet archives, convenient much? However, if you would live to view the first page there is a screenshot below: 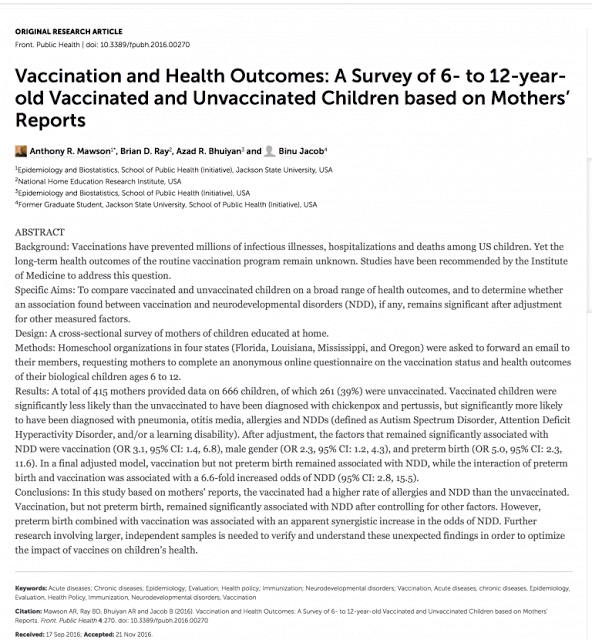