If you take the time to examine your personal buying habits closely, it is extremely obvious that those habits are based on decisions, informed or not. Often times we are forced to reexamine out habitual choices in the light of new information or based on negative experience, this is one of those times.

If Starbucks is on your list of favorites, the time has passed to reconsider that choice and perhaps redirect your dollars elsewhere.

“In the past 2 years alone, Starbucks has been a part of a GMA-led coalition that has donated more than $70 million dollars to defeat GMO labeling efforts in California and Washington State. By opposing GMO labeling, Starbucks has willingly climbed in bed with Monsanto and the GMA and is intentionally misleading customers about their commitment to “sustainability” and “ethical sourcing.” 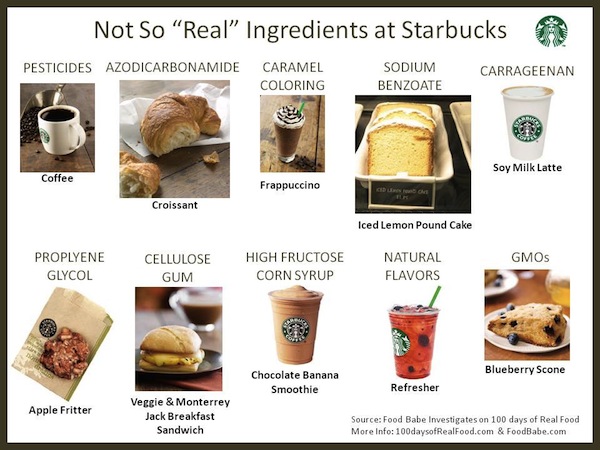 On March 4, 2014, Green America’s GMO inside announced the launch of an anti-GMO campaign that was aimed to pressure Starbucks to stop using milk sourced from cows raised on GMO feed. So far 150, 505 letter have been sent to Starbucks through the combined efforts of GMO Inside, Food Democracy Now!, Organic Consumers Association, and Friends of the EARTH.

Now it is your turn to tell Starbucks you are against the use of GMO’s in the products you are consuming, send your own letter or the template letter to Howard Schultz, and urge him to use only GMO-free organic milk in all their stores.

“The days when a global company like Starbucks can hide GMOs from the customer are over. The age of transparency is here and I expect Starbucks will shortly realize it’s in its best interest to eliminate GMOs from its supply chain,” exclaims GMO Inside Co-Chair John W. Roulac.

As of now Starbuck’s milk comes from factory farmed cows. The poor cows are injected with antibiotics throughout their lifecycle and fed an unhealthy diet of GMO feed including:

Just in 2011 alone Starbucks used over 93 million gallons of milk, or enough milk to fill an Olympic-sized swimming pool.