What Happens to Your Body When You Drink Soda (Infographic)

There is one beverage that has persisted to be a favorite among the public ever since its creation – soda. However, within the bubbly deliciousness, there’s a darker truth to the drinks. They’re not only full of sugar, but also other toxic ingredients.

Soda has been around since the 20th century. It has been a favorite among people for almost a century. While the creation of the beverage might seem rather innocent, it really isn’t! In fact, there are studies that prove that the very first versions of Coca-cola had traces of cocaine in them. Of course, there isn’t cocaine in the modern day versions, there are some dangerous ingredients in the drink.

There are even some ingredients in modern day soda that are known to be cancer causing. One of the most dangerous ingredients in the drink is known as 4-mel or 4-methylimidazole. In February 2011, Center for Science in the Public Interest (CSPI) petitioned FDA to ban the use of 4-Mel which is formed as a byproduct of caramel coloring due to the reaction between sugar, ammonia and ammonia sulfite. However, according to NPR, the FDA issued a statement saying that consumers should drink more than 1,000 cans of soda a day to reach the doses that have been shown to lead to cancer in rodents. 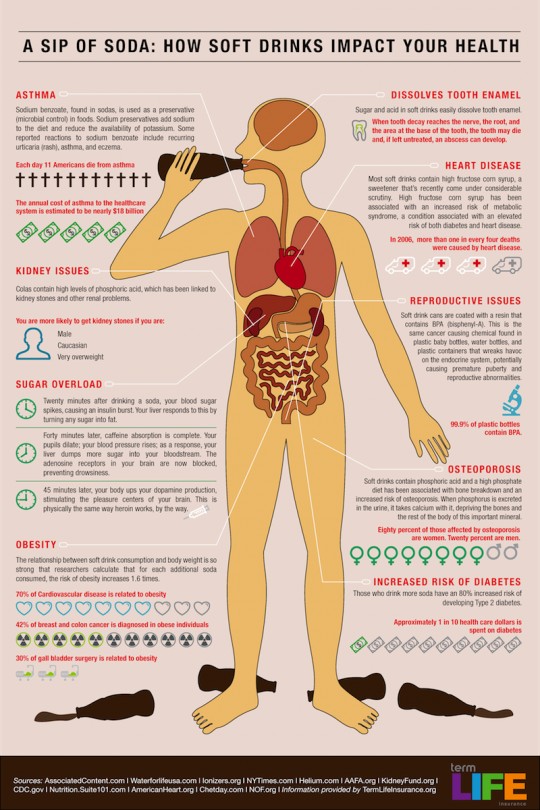 Soda has more effects on your body than you think. For starters, it is packed full of sugar. One can of soda is equivalent to eating 10 teaspoons of sugar! This amount of sugar can skyrocket your blood sugar and can result in an insulin deficiency, or diabetes. It also has ridiculous amounts of caffeine in it. If you’re curious as to what soda does to your body, check out the infographic above.