Home Health These Are the Warning Signs of a Stroke
Health

These Are the Warning Signs of a Stroke

Strokes are a serious health complication and are extremely life threatening. When it comes to a stroke, nothing matters more than how fast you can react.

A stroke occurs when the blood supply to the brain is interrupted or reduced. This deprives the brain of oxygen-rich blood, resulting in the rapid death of brain cells. It could be caused by several different things. It is usually caused by a blocked artery or the leaking and bursting of a blood vessel. Some people might only experience a temporary disruption in blood flow to their brain. This is called a transient ischemic attack.

Fixing a stroke is a complicated cardiovascular surgery, but that is the doctor’s job. However, getting the patient to the doctor will be completely up to you in the case of an emergency and time is crucial. You’ll need to immediately call 911 if you see any of the following symptoms in a patient. In the event of a stroke crisis you’re going to want to act FAST. (Face, Arms, Speech, and Time.) these are the most crucial components of recognizing a stroke and getting the patient to a hospital as quickly as possible. 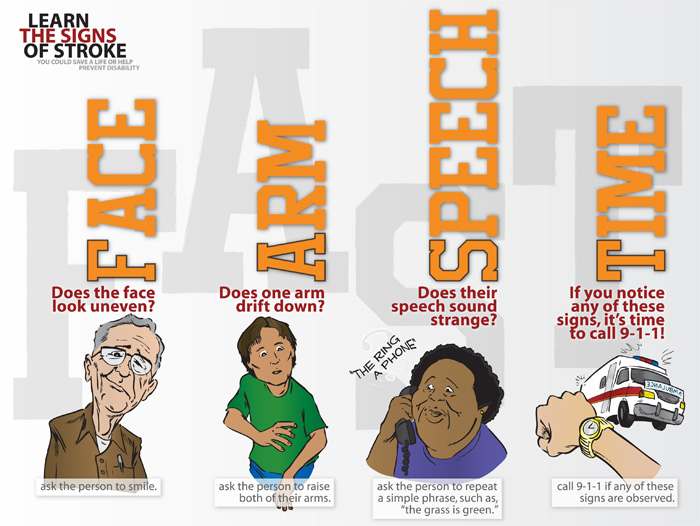 Face – Ask the person to smile. In the event of a stroke, the person will experience a loss of feeling and numbness typically on one side of the face. When you ask them to smile, check for any droopiness.

Arms – Ask the person to raise both arms. If one arm drifts downward it is likely they are having a stroke. You will see this on one side of the body too.

Speech – When someone is experiencing a stroke they will most likely have problems trying to speak. Ask them to repeat a simple phrase, such as the ABCs. Does their speech sound slurred or strange?

Time – Like I said before, during a stroke time is everything. You don’t want any more brain cells to die than what already has. If you observe any of these signs, call 911 immediately.