People say that the eye is a window into the soul. They might be onto something too! You can learn a lot of things through your eyes! For example, here are 7 life threatening health conditions that can be recognized through your eyes!

The human eye is amazing. We don’t often give our eyes as much thought as we should, that is until something goes wrong and our vision is affected. Also, you can suffer from many health conditions and be completely unaware! Simply using the human eye, you can recognize these 7 life threatening health conditions! Scientists say that you can tell a lot about a person through their eyes. They claim that you can see personality, character, and fortune traits of a person through the eyes.

Daniel Richardson, a neuroscientist at the University College London who led a study that found eye movements facilitate memory retrieval, says “the eyes are like a window into our thought processes, and “they could potentially reveal things that a person might want to suppress, such as implicit racial bias.” Another doctor that specializes in the human eye is Dr. Mark Lipton. He is the director of optometry at Beach Eye Care in Virginia Beach. He explains some red flags you should look out for in your eyes.

Bulging of the eyes can be an indicator of serious health issues. Doctors call this indicator Exophalmos. Exophthalmos is defined in Dorland’s Medical Dictionary as an “abnormal protrusion of the eyeball; also labeled as proptosis.” Proptosis in the same reference is defined as exophthalmos. Another resource suggests that the terms exophthalmos and proptosis can be used to describe eyes appearing to bulge out of the face due to an increase in the volume of the tissue behind the eyes. Other potential causes of bulging eyes include neuroblastoma, a type of cancer that can affect your sympathetic nervous system; leukemia, a type of cancer that can affect your white blood cells; rhabdomyosarcoma, a type of cancer that can develop in your soft tissues.

The primary causes of blurred vision are refractive errors — nearsightedness, farsightedness and astigmatism — or presbyopia. But blurry vision also can be a symptom of more serious problems, including a potentially sight-threatening eye disease or neurological disorder. Blurred vision at all distances often is a symptom of astigmatism. A type of refractive error, astigmatism usually is caused by an irregularly shaped cornea.

A cataract is a clouding of the eye’s natural lens, which lies behind the iris and the pupil. Cataracts are the most common cause of vision loss in people over age 40 and is the principal cause of blindness in the world. In fact, there are more cases of cataracts worldwide than there are of glaucoma, macular degeneration and diabetic retinopathy combined, according to Prevent Blindness America (PBA). Today, cataracts affect more than 22 million Americans age 40 and older. And as the U.S. population ages, more than 30 million Americans are expected to have cataracts by the year 2020, PBA says. 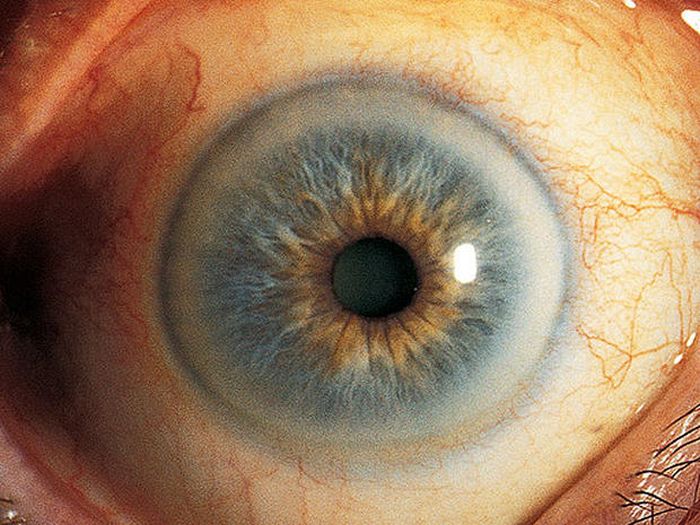 Arcus senilis is a white, grey, or blue opaque ring in the corneal margin (peripheral corneal opacity), or white ring in front of the periphery of the iris. It is quite commonly present in the elderly. It can also appear earlier in life as a result of hypercholesterolemia. Arcus senilis can be confused with the limbus sign, which reflects calcium rather than lipid deposits.

Normally the whites of eyes or sclera are white in color. One can get yellow sclera, a condition also called scleral icterus, which is caused by an elevation of bilirubin in the bloodstream. Bilirubin is made in the liver and is yellow in color.  If a person suffers from liver disease, the liver can no longer process the breakdown of red blood cells and bilirubin, its natural metabolic product, no longer enters the bile and instead builds up in the blood and tissues, including the sclera of the eyes. 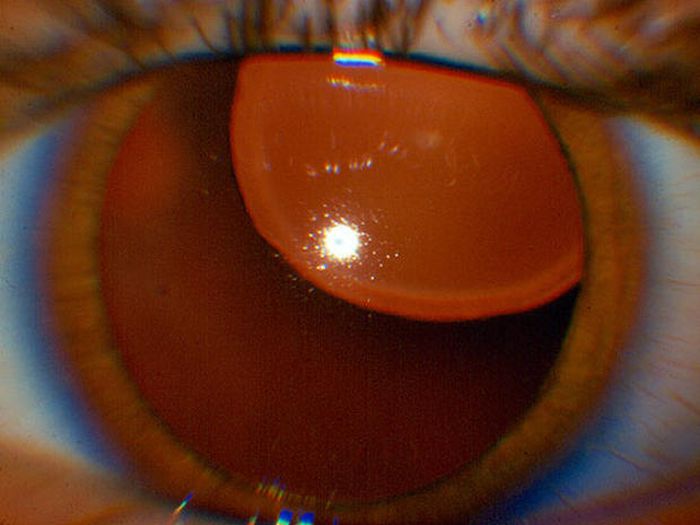 Ectopia lentis syndrome is an inherited connective tissue disorder that shares some of the features of Marfan syndrome – particularly lens dislocation of the eye, which can cause serious vision problems. A person may be diagnosed with ectopic lentis syndrome when they inherit the skeletal features of Marfan syndrome (e.g., long arms, legs and fingers; tall thin body type; curved spine, etc.) together with lens dislocation of the eye, but have no other Marfan features such as those affecting the heart and blood vessels.