Home Health My 3-Year-Long Migraine Without The Headache
Health

My 3-Year-Long Migraine Without The Headache

Headaches are awful and awfully common. The pain can typically be sufficed by taking a few Tylenol. But not if you suffer from vestibular migraines.

Headaches are a horrible thing to experience, especially regularly. I’m sure we’ve all had at least one headache before, and we can all agree that we wouldn’t want to have another. Sadly, for those who suffer from migraines, it is essentially inevitable – especially if they suffer from vestibular migraines.

Migraines are typically a one sided, throbbing headache. They can be ranged from moderate to severe pain and intensity and are often related to light or sound sensitivity. They typically consist of symptoms like nausea, vomiting, and visual aura that precedes a headache. Vestibular migraines are different from regular migraines because the most predominant symptom is dizziness. Patients complain of the migraines coming out of nowhere, and intense dizziness almost immediately affecting them. Some patients even describe a spinning or rocking sensation followed by intense light and sound sensitivity.

Vestibular migraines are believed to be an inherited disorder. Patients brains are normal on MRI imaging, but in the same way, a migraine is a disorder in function, vestibular migraines could be too. They have light and sound sensitivity, nausea, and eventually, end up hugging a toilet bowl vomiting. Researchers say that there is hyperexcitability in the brain stem that overlaps with the vestibular structures that help keep our balance. So, this is what is obviously causing the dizziness.

It all began one day during my freshman year of college. I awoke to a feeling of an elevator dropping inside of me which progressed to a constant feeling of off balance. I proceeded to the ER in utter fright – nothing emergent was wrong. I waited to see my doctor at home after finishing up the school year. I was told I had labyrinthitis and it goes away soon. She was completely wrong. A few weeks into my sophomore year of college I started having blurry and double vision. I felt like I was floating on a raft in the ocean every time I laid down. I constantly went to doctors, but everyone told me it was stress and anxiety.

I began getting sensations that gravity was pulling me in random directions. It was very difficult to sit in class and I was in hard classes at the time — I was taking organic chemistry and physics. One day, I grew frustrated and went to the hospital. I remember the doctors asking me to call my parents and them saying, “We’re sorry but we think your daughter has MS.” I ended up not having MS, but I didn’t know what I had.

My symptoms eventually became 24/7. I went to an ENT who diagnosed me with BPPV. He did an Epley Maneuver, but it only helped for a day. I went to a chiropractor who told me that something was wrong with my neck and that all just made me feel worse. I spent my 21st birthday crying. My symptoms were getting worse every month. I truly don’t know how I passed my classes that next semester. The following summer was yet again spent trying to figure out what was wrong with me. My goal was to figure out what was wrong with me by the time I began pharmacy school at the end of August. Unfortunately, I did not achieve that goal.

November 20, 2016 was one of the worst days of my life. The symptoms came back more severe than imaginable – and stayed like this for 5 months straight, every minute of the day. This was when I became off-balanced, dizzy and unable to walk without holding onto things. I felt like my head was a bobble head. I felt like I was constantly drunk and on a boat. I studied for my final exams feeling like I was bouncing on the chair as my head was rocking and swaying. That winter break, my symptoms were unbearable. I was unable to sit without falling off the chair and my whole body felt like I couldn’t control it. I was so dizzy. Two days before Christmas I got a call saying some labs pointed toward a tumor and that I needed have MRI’s of the brain and cervical spine. I was scared, yet relieved that I may have an answer. The MRI came back clear, which shocked the doctors. I was sent home and referred to a neurologist with an 8-month waiting list. 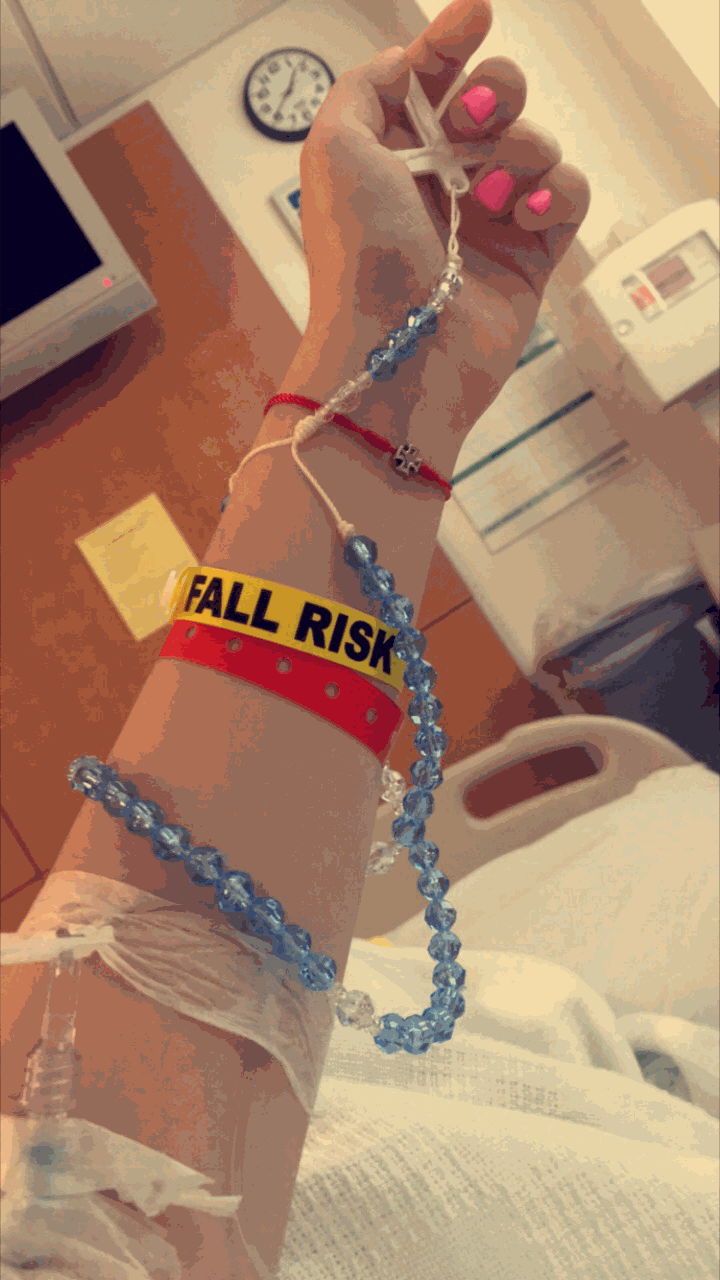 On New Year’s Eve, I sat on the couch crying uncontrollably; it was the third year I had been sick with this unknown illness. Many of my friends texted me that 2017 was going to be a better year and I replied, “you said that last year and the year before.” I was screaming and crying in agony as the ball dropped. My head was furiously rocking as my body was floating and being pulled every which way. From midnight until 7 am I sat on my bed in a ball rocking back and forth. My ears were filled with an excruciating ringing for 12 hours straight. I went to the ER. I sat in that waiting room for 5 hours with my whole body and head rocking back and forth.

The doctors said my ear looked like it was bulging. I was so excited and wondered how nobody ever noticed this. They told me that the false movement sensations were vertigo. I thought vertigo meant the room was spinning, but that day I learned it can mean that you feel like you are moving. They gave me a massive dose of steroids and I felt so much better I was crying of joy. Well, two days later it all came back. I had no idea how I was supposed to take on another semester of school while battling this. But I tried. I hit my car twice, which led me to make the difficult decision to take a year off of school.

I was then hospitalized for 6 days. I saw an ENT and a Neurologist. The ENT thought I may have Superior Semicircular Canal Dehiscence Syndrome (SSCD), but it came back negative. The neurologist didn’t have a clear diagnosis but he put me on Topamax because he “thought it may work.” He said I wouldn’t notice any improvement for at least a month or even two months. That was sure great to hear. I left the hospital no better.

A month later, the phone rang. There was a cancellation to see the vestibular neurologist that I couldn’t see for 8 months. This is the day someone finally actually understood what I was going through. He spent over 2 hours with me. This is the day I was diagnosed “Vestibular Migraine.”

I had a hard time believing this. I did not have a headache and my symptoms were 24/7. I knew people with migraines and this was not what I had. He said that my light and smell sensitivities, as well as my childhood history of sinus headaches (which I thought were sinus infections at the time), fit the criteria for a migraine. I began vestibular rehab. I had an amazing physical therapist that gave me exercises to help me sit again without falling off of a chair. I was starting to feel a little better. The Topamax began to help at 25 mg twice a day and I eventually added Effexor XR 37.5 mg. I also take Riboflavin, Ginger, Coenzyme Q10, Vitamin D and Magnesium Glycinate daily. In addition, I am doing a migraine food elimination diet from the book “Heal Your Headache” by David Buckholtz; I strongly recommend reading this as it explains the mechanism of a migraine in detail as well as using medications.

The medications, supplements, and diet have helped me so much.

I am proud of how far I have come and I am proud I never gave up on searching for an answer.