A Look at the Meridian Points Throughout the Body

Modern science deserves to be praised for its discoveries in the last decade. However, despite the beneficial discoveries of modern science, it can hold up back in ways.

Modern science has achieved some remarkable things in the last decade. For example, in 2014 we discovered how to use young blood to defeat old age! Modern science also created the first cooperating robot in the same year! Without modern science, we wouldn’t be who we are today. We thank modern science for that. However, sometimes modern science can hold us back from discoveries.

Modern science often discards the existence of things of a spiritual nature. It is often gone by the guidelines of “if you can’t see it, it isn’t real.” Science has been known to label things like meridian points as fictitious. Nikola Tesla said that “the day science begins to study non-physical phenomena,  it will make more progress in one decade than in all the previous centuries of its existence.” Nikola Tesla has an excellent point, and not all scientists disagree with him. In fact, hundreds of scientists around the world have been studying subjects like these for years.

There is no doubt that we could all benefit from the study of these things. Studies have shown that aligning the energy points in your body, or chakras can make you feel better all around. Other studies show that we carry our emotional stress in our physical bodies. The emotional stress causes pain in the body. Once the emotional burden is dealt with, the pain goes away! Everyday people like you and I could benefit from the studies of spiritual elements like these. I would be especially beneficial to the healthcare community.

An example of negligence in this field is acupuncture. Acupuncture is an ancient Chinese medical practice that manipulates different pressure points in the body to cause a reaction. Acupuncture is most commonly practiced using carefully placed needles. This practice can relieve pain, stress, and tension. It effectively works for millions of people! Acupuncture has been around for thousands of years, and science still has no answer for it. Acupuncture uses a meridian system in the body. A meridian is basically a route of travel for energy; an energy highway. They flow all throughout the body and can affect you in many different ways.

The meridians flow all throughout the body. Manipulating them can have many different effects on your body. Ancient Chinese medicine has practiced this for millennials. The term ‘meridian’ describes the overall energy distribution system of Chinese Medicine and helps us to understand how basic substances of the body (Qi, blood and body fluids) permeate the whole body. The individual meridians themselves are often described as ‘channels’ or even ‘vessels’ which reflects the notion of carrying, holding, or transporting qi, blood and body fluids around the body. 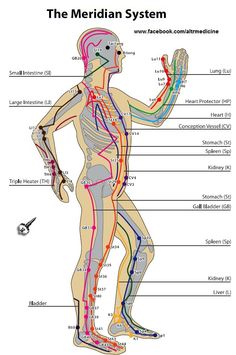 All of these points act as reservoirs of Qi and blood for the 12 regular channels. They circulate essence around the body. They have a strong connection with the kidneys. They provide further connection with the twelve regular channels too. The meridian system of the human body is a delicate, yet intricate web of interconnecting energy lines. If a person masters an understanding of this meridian system they will know the secrets of the flow of Qi energy in the body.