Business Insider reports that 32% of all quick-service restaurant visits were to McDonald’s, the titan of fast food here in America. The incredible part of that statistic is that the next closest chain on the list was Starbucks with only 11%, meaning that almost three times as many people visited McDonald’s than any other quick-service chain in the country!

The golden arches have become a symbol of our society, a recognizable sign that nearly every child is able to recognize, even from a distance. It’s the place we associate with childhood birthday parties and fun family meals after the ball game. A place of smiles and laughter, however, it is hiding some big secrets!

Recent documentaries and social media posts have drawn attention to a dark side to the restaurant, highlighting frightening truths from ‘extra special’ toppings to subliminal messaging in their advertising. Here are 15 disturbing secrets that McDonald’s doesn’t want you to know! 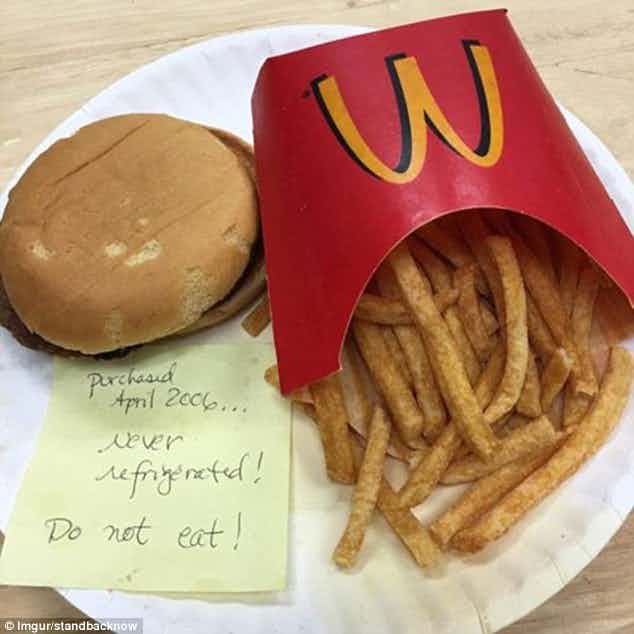 If you have ever found yourself questioning the nutritional value of a McDonald’s burger, consider this. A number of preservatives in their food is at such a high level that their food literally never goes bad. If you were to purchase a McDonald’s burger and leave it sitting out it won’t suffer the fate of most foods, starting to rot in a matter of days, it will stay in the exact same condition it was purchased for years! Don’t believe us? The last burger made in Iceland is currently on display, and can even be viewed live on webcam. After over 7 ½ years it still looks as fresh as the day it was made!

#2 –  The Real Purpose of the Happy Meal 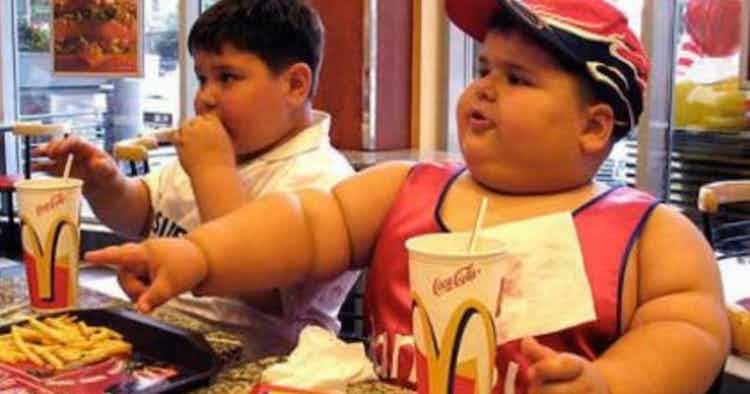 The Happy Meal is a favorite childhood memory for many, heading to the golden arches for their favorite foods and that fun little toy. The truth is that the idea of the Happy Meal is a carefully planned marketing move, appealing to children at a young age and recruiting them into the legions of dedicated McDonald’s customers. This isn’t the only effort that the company has made to appeal to the younger generation. Secret documents regarding the role of Ronald McDonald in the restaurant revealed that he was actually created to be a father figure, encouraging children to want to spend their birthday parties at the restaurant! 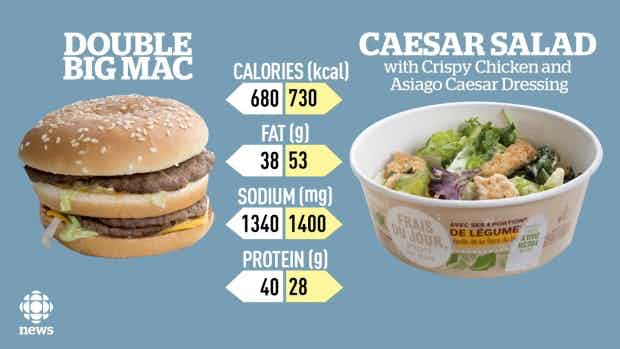 With the release of McDonald’s salad options, the company was able to draw in a new, more health-conscious crowd. These ‘healthy’ alternatives were carefully marketed to change the public view of McDonald’s, and the marketing campaign was highly effective! People began selecting the salad over their previous favorites, feeling better about the healthy choices they were making, however, what they didn’t know is that they were being horribly misled! While the idea of a salad may sound healthy, these salads are anything but! With more calories, fat, and sodium than a Big Mac, the salad bowls are actually the most unhealthy item on the menu! 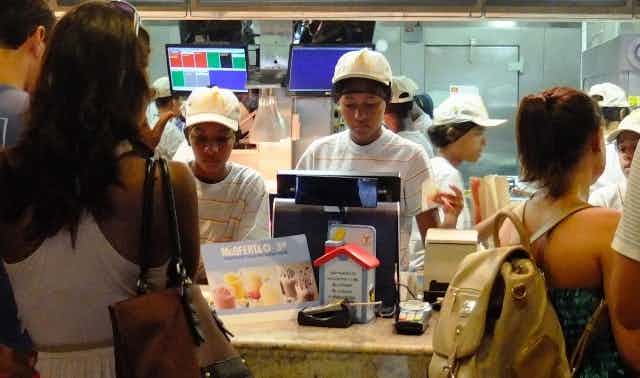 There have been a number of accusations worldwide in regards to the way that McDonald’s treats their ‘beloved employees.’ Starting their Crew at minimum wage, they have pushed many to the breaking point time in time again. Starting in November 2012 employees began to stage walkouts, demanding better treatment and fair wages. It was reported that a 79-year-old McDonald’s employee with over 15 years on the job was fired after his bosses found out he was petitioning co-workers. Only 3 of the 40 employees at his store were willing to sign his petition for fear of being fired. In 2014 the company was even accused of requiring staff to work 25-hour shifts!

#5 – Monopoly Was Nothing More Than a Scam 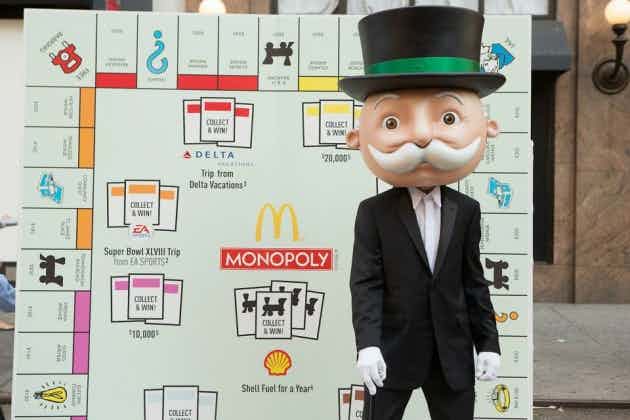 The popularity of McDonald’s Monopoly cannot be contested, attracting thousands of people to collect their game pieces in hopes of winning one of the company’s grand prizes. Unfortunately, it appears that for a period of time the game was fixed, and there were zero chances of pocketing one of the big-ticket items! Chief of Security Jerome P. Jacobson was able to figure out how to remove all of the most expensive game pieces in the US market, handing them off to his associates who redeemed them for rewards sharing the proceeds. The group won almost every single top prize between the years of 1995 and 2000, netting over $24 million in prizes! 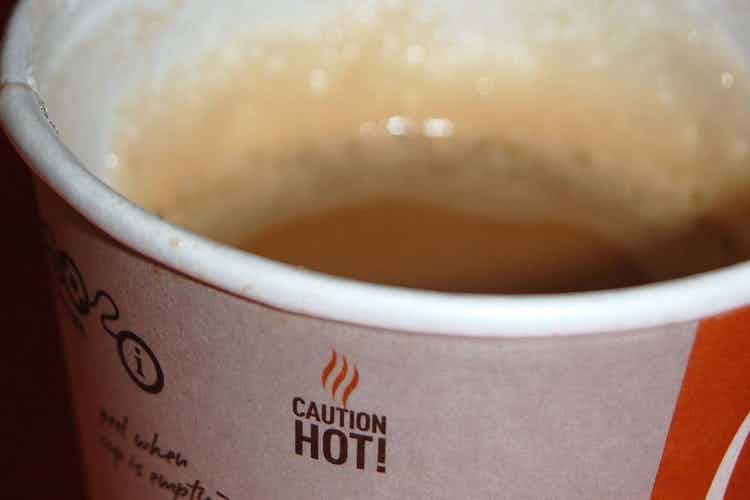 Probably the most famous incident that has ever been associated with the McDonald’s franchise is that of the 1992 coffee incident. A customer sued the company for $160k after spilled coffee caused such severe burns that she required skin graft surgery. Found to be the fault of improper packaging, the courts forced the company to pay $640k! While the best known, this isn’t the only time the company has been the subject of a scandal. In 2014 the Shanghai meat factory that supplied a number of the restaurants with meat was caught on camera combining raw, cast off meat with cooked produce and packaging the product with bogus expiration dates. Ultimately, they were supplying the company with expired meat! After the discover the factory was forced to permanently close its doors.

#7 – A Few Extra Ingredients Thrown In 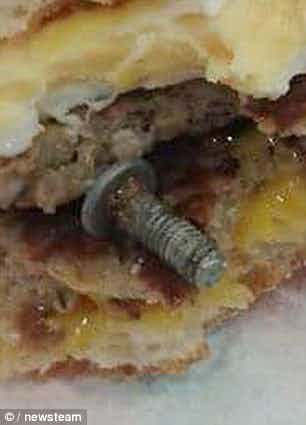 We have all heard the stories of restaurant goers finding something unsavory in their food like a hair or a fly, but McDonald’s has served up far more disturbing meals than that during their history! Stories have emerged across the globe including a number of disgusting discoveries such as bolts, fecal matter, pubic hairs, condoms, maggots, and syringes. In 2000 a woman reported that she deep fried chicken head in with her Chicken McNuggets. A man in Texas reported a dead rat in his salad in 2006! While one can see how a single hair could be overlooked, some of these stories beg to question whether someone is actually inspecting the food before preparing it! 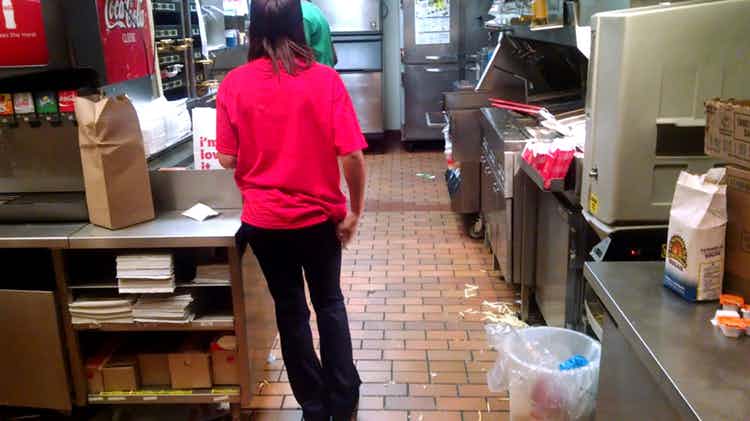 The next time that you are ordering food at your local McDonald’s and find yourself getting a little frustrated with the staff, you may want to hold back your true feelings! A number of reports have rolled in from restaurants across the country pointing at kitchen staff providing rude customers with their ‘just rewards.’ It has been alleged that the staff will add spit or hairs to the order of a rude customer to ‘teach them a lesson.’ Other reports include staff dropping buns and other food on the floor, only to pick them up and serve them anyway, or licking fries before sending them out the door. So, next time you are picking up fast food, a smile is the key to a better meal! 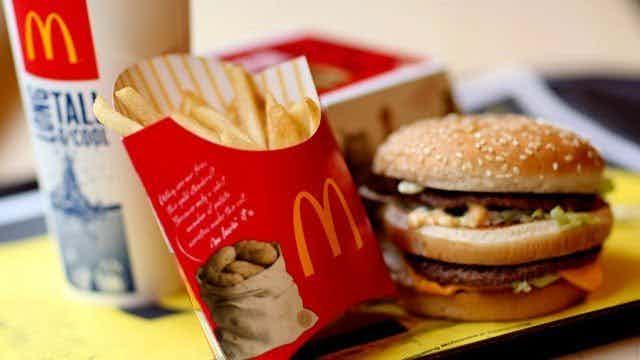 While the fact that McDonald’s foods aren’t ‘healthy’ isn’t a surprise to many, it is shocking just how unhealthy it really is! Experts have found that eating McDonald’s food for an extended period of time can add up to some pretty scary statistics! It has been associated with the onset of type 2 diabetes, rising obesity rates (some experts even say by 70%) and high blood pressure. Some experts even claim that long term exposure to McDonald’s food can cause erectile dysfunction! 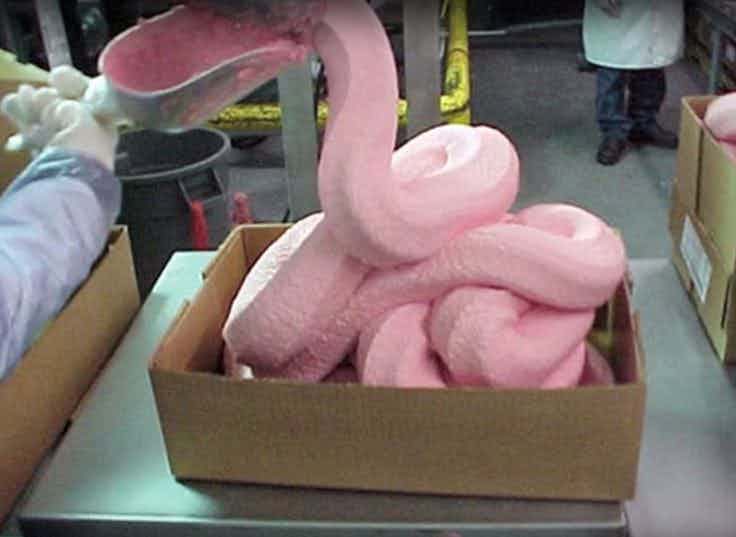 A well-publicized scandal, McDonald’s was accused of using a pink slime product comprised of cow muscles and connective tissues for all of their burgers. While some may find this image to be hard to believe, the truth is that the beef by-product mixture was used in all McDonald’s burgers prior to 2011! In an effort to turn around their image and retain their customers the restaurant has now switched their recipes and claim to be using 100% pure beef with no by-products in any of their burgers. 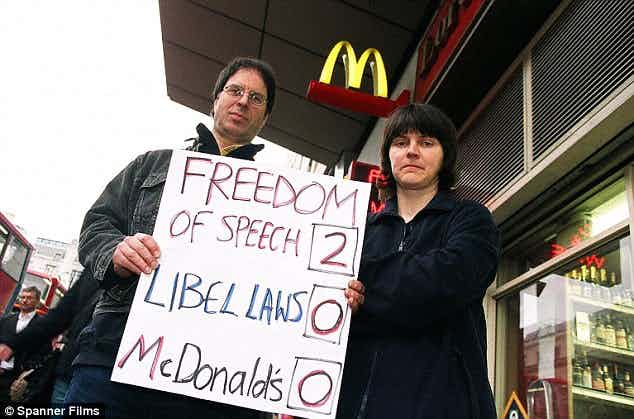 A 1986-1997 case, one of the longest-running cases in English history, is a perfect example of the libel disputes that arise from the restaurant’s desperate attempts to conceal their less than stellar business choices. Environmental activists Helen Steel and David Morris were distributing a shockingly exposing pamphlet by London Greenpeace called ‘What’s Wrong with McDonald’s – Everything They Don’t Want You to Know” when they company proceeded to sue them for libel. Ultimately McDonald’s lost the case when the judge determined that their food actually doesn’t hold up to the nutritional values that they had been advertising and that the company had been paying their employees ‘rock bottom wages.’ 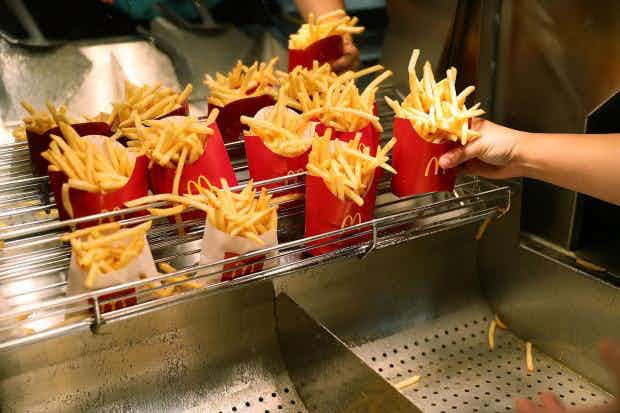 The Scripps Research Institute in California ran an in-depth study into the foods at McDonald’s in hopes of discovering why we are so compelled to keep returning to the restaurant. What they found was that the high sugar content included in the foods generates an abundance of dopamine, a chemical associated with the reward center of the brain. This process is very similar to the body’s response to the use of hard drugs. This is why eating McDonald’s food actually leaves you feeling happy! 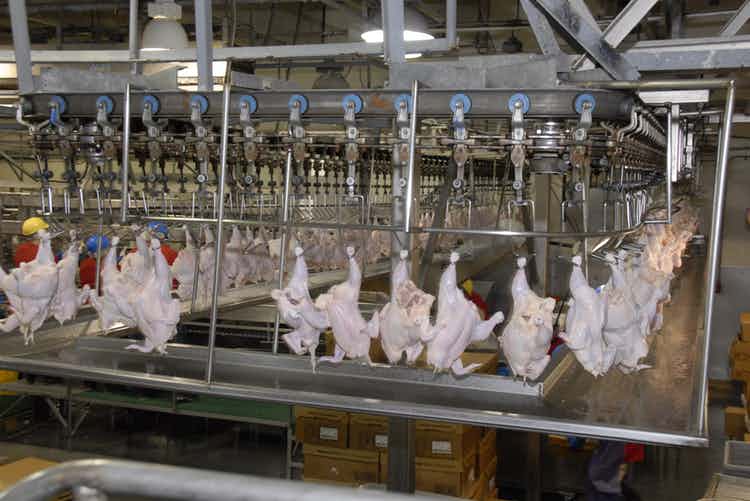 In a society where we are becoming increasingly focused on what we are feeding our bodies, the truth behind some of the chemicals included in your favorite McDonald’s meals might be frightening! The former host of ‘Mythbusters,’ Grant Imahara revealed that those delicious fries that you enjoy with each meal include a total of 19 different ingredients, including a petrol-based chemical called tertiary butylhydroquinone (TBHQ) and a form of silicone called Dimethylpolysiloxane. Have you ever noticed the rubbery taste that accompanies their signature chicken nuggets? Take a close look at their ingredients and you will find silicone oil, the same oil that is used to create both contact lenses and breast implants! 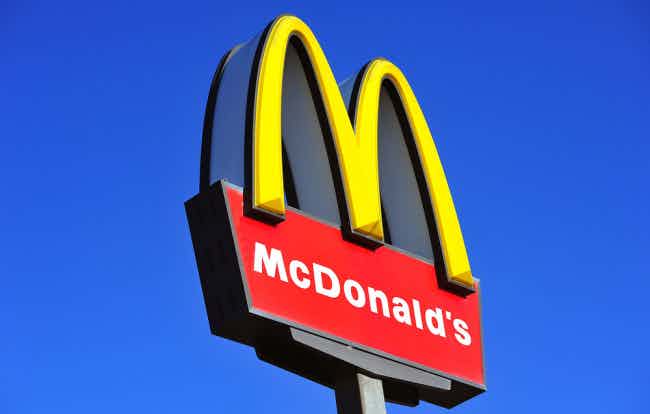 We are all overly familiar with those big golden arches, one of the most recognized logos in our society. While many will look at it and assume that the golden sign is actually an M, the truth is not nearly as clear. In the 1960s the company hired design consultant and psychologist Louis Cheskin to design a new logo. He came back to the executives with the golden, breast-shaped arches, a subliminal message representing boobs that he stated would play upon the Freudian importance in the subconscious mind, attracting new customers.

It appears that time and time again PETA and McDonald’s are at war – and given the claims that PETA has been making, with good reason! The animal rights activist group has been working to expose the shocking truth of the company’s farming operations since 2000. They revealed that the company breeds their chickens on steroids, kept in dark, cramped, windowless sheds, in order to speed up their growth to unbelievable rates. They have also accused workers in both the US and Canadian slaughterhouses of treating the animals in ways that would have made front page news should they have been cats and dogs instead of chickens. They allege that the workers cut the throats of the birds while they are still aware, and sometimes they will throw them into tanks of boiling hot water when they are still alive. The group is not ready to bow down yet, vowing to expose the truth of the company for as long as these heinous acts continue.